How to grow Aubergines 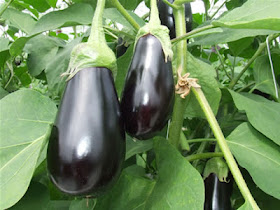 Did you know that aubergines are members of the solanum, or potato family (as are tomatoes. As a result you often hear that growing aubergines is as simple as growing tomatoes with some people making the claim that if you can grow tomatoes outside you will be able to grow aubergines without protection too. However in the UK this really is't true.

Aubergines require significantly warmer temperature than tomatoes to produce a decent crop, so if you intend growing them outside then you will need to provide a sheltered position as well as some protection for them to do well.

As well as needing higher temperatures to do well aubergines also need shelter from wind. Tomatoes will happily produce four to six trusses of fruit outside you must limit the number of fruits on an aubergine. This ensures that the plant will put its energy into a level of crop it can successfully ripen in the British Climate.

The original plant comes from the Indian subcontinent where it has been cultivated in southern and eastern Asia since prehistory, where it made its journey to Europe sometime around 1500ad. Written records of the plant can be found in ancient Chinese agricultural documents from 544ad. The many and varied Arabic as well as North African names for the plant complete with the lack of an ancient Greek or Roman name, suggest it was introduced to the Mediterranean area by the Arabs during the Middle Ages.And as a result it is this kind of Mediterranean climate the plant is most accustomed to and one which we need to recreate in the UK.

So how to grow them?

Aubergine seeds can be sown anytime from February to April, either in a greenhouse or poly-tunnel or inside on a windowsill.

Fill 9cm pots with a good quality seed compost and lightly firm the surface. You can place up to seven seeds on the surface of the soil in each pot.

Cover the seeds with a fine layer of vermiculite and put the pots in a heated propagator set at a temperature of around 21°C. Water the pots sparingly, avoid water logging but remember the compost should be kept moist.

The seed should germinate within 3 weeks, and once the leaves have fully formed they can be pricked out into individual 9cm pots.

Allow the plants to develop in their own pots, and once you can see the roots coming out of the bottom pot up to the next sized pot.

Cut the tip of the plant once it is about 35cm tall, this will encourage a bushier plant. As the plants develop tie into small canes.

Plant out into a sheltered spot in late may or into the greenhouse, and provide support. Feed the plants weekly with a high potash plant food (tomato food would be good).

Use a clean small paintbrush to fertilize the flowers and encourage fruiting. The plants can drop their flowers if temperatures fall, hence a greenhouse being ideal.
1 comment:
Share

The Differences between a lean to and a Freestanding Greenhouse

When it comes to greenhouse growing, it is important that your greenhouse suits your requirements. Different designs provide different benefits, so you will need to explore what is available to decide what type of structure is right for you.

By looking at the main differences and advantages of freestanding greenhouses and lean to greenhouses, you can decide which design will best suit your needs and enhance your gardening experience.

How to Grow Blueberries 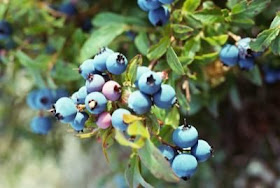 Blueberries, Vaccinium corybosum, are delicious regardless of whether eaten fresh or cooked. Although they are grown for their fruit, they are also highly ornamental, especially in autumn when they have red and gold leaves. Blueberries are best suited to more acidic soils, they can be grown in the garden or in containers. The most suitable for cultivation in the UK is Northern Highbush blueberries. Before planting you should improve the soil by removing all weeds and incorporating well composted bark, bracken, leaf mould, pine needles or sawdust to a fork’s depth. You should check on the pH of the soil every few years, as it may be necessary to add acidity. Alternatively grow them in a pot.

Plant at least two plants to ensure cross-pollination. A single blueberry plant will produce fruit, but the yields will be higher and the fruits bigger if more than one plant is grown. They like being in part shade to full sun.

When the leaves have fully opened in late spring, the bushes will need their first feed of the season.

It is worth using nets to keep the birds away from your harvest.

Blueberries are not always fully hardy so provide some protection and move pots into a shed or cool garage in poor conditions.

The fruits ripen over a period of time so you will need to stagger the harvest from each plant.

Blueberries produce fruit on last years growth so be careful not to remove this when pruning, keeping an open shaped bush.
No comments:
Share 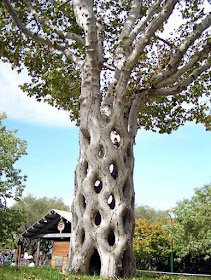 As a hobby, bean farmer Axel Erlandson shaped trees – he pruned, bent, and grafted trees into fantastic shapes and called them "Circus Trees." For example, to make this "Basket Tree" arborsculpture, Erlandson planted six sycamore trees in a circle and then grafted them together to form the diamond patterns. topped them all at one foot, then approach-grafted them together one to another to form the diamond patterns. For the first 2.5 meters (8') he left an opening at the top.
Today his trees are the center pieces of Gilroy Gardens in Gilroy California, including the Basket Tree.
4 comments:
Share 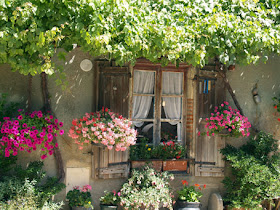 •August is a great time to increase your plant stocks for yourself or to give to friends by taking cuttings of tender perennial plants, such as verbenas or pelargonium’s. Using a sharp knife cute a neat cutting and then dip each one into a hormone rooting compound before placing them them into small pots of mulktipurpose  compost mixed with perlite. Water them in well and place the pots in a cold frame/greenhouse if you have one or on warm windowsill but keep them out of direct sunlight. Hopefully they should root within eight weeks and can then be potted up and grown on over winter in the greenhouse or a windowsill.


• Cut back your lavender bushes once the flowers have gone over, dont cut back too hard or you may damage the shrub, (dont cut into the woody stems). Its worth noting that goldcrests love the seeds and if you
leave the seeds on the bushes then you may get lots of autumn visitors.

• Although this year has been wet, make sure you dont let potted plants dry out in any warm spells we have.

• Stop feeding roses in August as excessive feeding encourages soft growth that won't have a chance to ripen before the winter, this can get damaged and allow pests and dieseases to attack your plants.

• Vine weevils have become a regular garden pest over recent years, the bugs munch on leaves of your plants, you will notice notches being bitten at the edge, rather than in the middle more common with slug damage. However the unsightly blotches are not the main problem, but rather the grubs which will feast on the roots of your plants. Using a chemical or biological control now will help reduce the risk.
1 comment:
Share 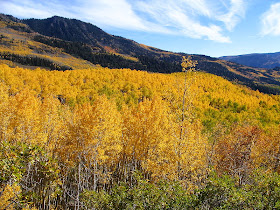 Pando (Latin for "I spread"), also known as The Trembling Giant, is a clonal colony of a single male Quaking Aspen (Populus tremuloides) located in Utah, determined to be a single living organism by identical genetic markers and one massive underground root system. The plant is estimated to weigh collectively 6,000,000 kg (6,600 short tons), making it the heaviest known organism. The root system of Pando, at an estimated 80,000 years old, is among the oldest known living organisms.

Pando is thought to have grown for much of its lifetime under ideal circumstances: frequent forest fires have prevented its main competitor, conifers, from colonizing the area, and a climate shift from wet and humid to semi-arid has obstructed seedling establishment and the accompanying rivalry from younger aspens.

During intense fires, the organism survived underground, with its root system sending up new stems in the aftermath of each wildfire. If its postulated age is correct, the climate into which Pando was born was markedly different from that of today, and it may be as many as 10,000 years since Pando's last successful flowering.
No comments:
Share 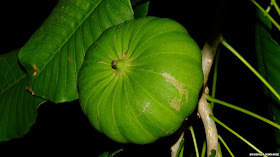 Otherwise known as the dynamite tree or monkey-no-climb tree (as opposed to the monkey puzzle tree), Hura crepitans which is native to the American tropics - has an explosive method of dispersing its seeds. One of its common names, dynamite tree, so named for the explosive sound of the ripe fruit as it splits into segments as it disperses seeds considerable distances from the mother plant.

Sandbox trees can grow to 60 metres tall and the large leaves grow to two feet wide. They are monoecious. The red flowers have no petals. Male flowers grow on long spikes; female flowers are solitary in axils. The fruit is a large capsule with explosive dehiscence. One source states that ripe pods catapult the seeds as far as 100 metres. It has also been known as the Dynamite tree, so named for the explosive sound of the ripe fruit as it splits into segments. This tree prefers wet soil, and partial shade or partial sun to full sun. It is often cultivated for shade.

Fishermen have been said to use the milky, caustic sap from this tree to poison fish. The Caribs made arrow poison from its sap. The wood is used for furniture under the name "hura". Before more modern forms of pens were invented, the trees' unripe seed pods were sawed in half to make decorative pen sandboxes (also called pounce pots), hence the name 'sandbox tree'.
No comments:
Share
‹
›
Home
View web version